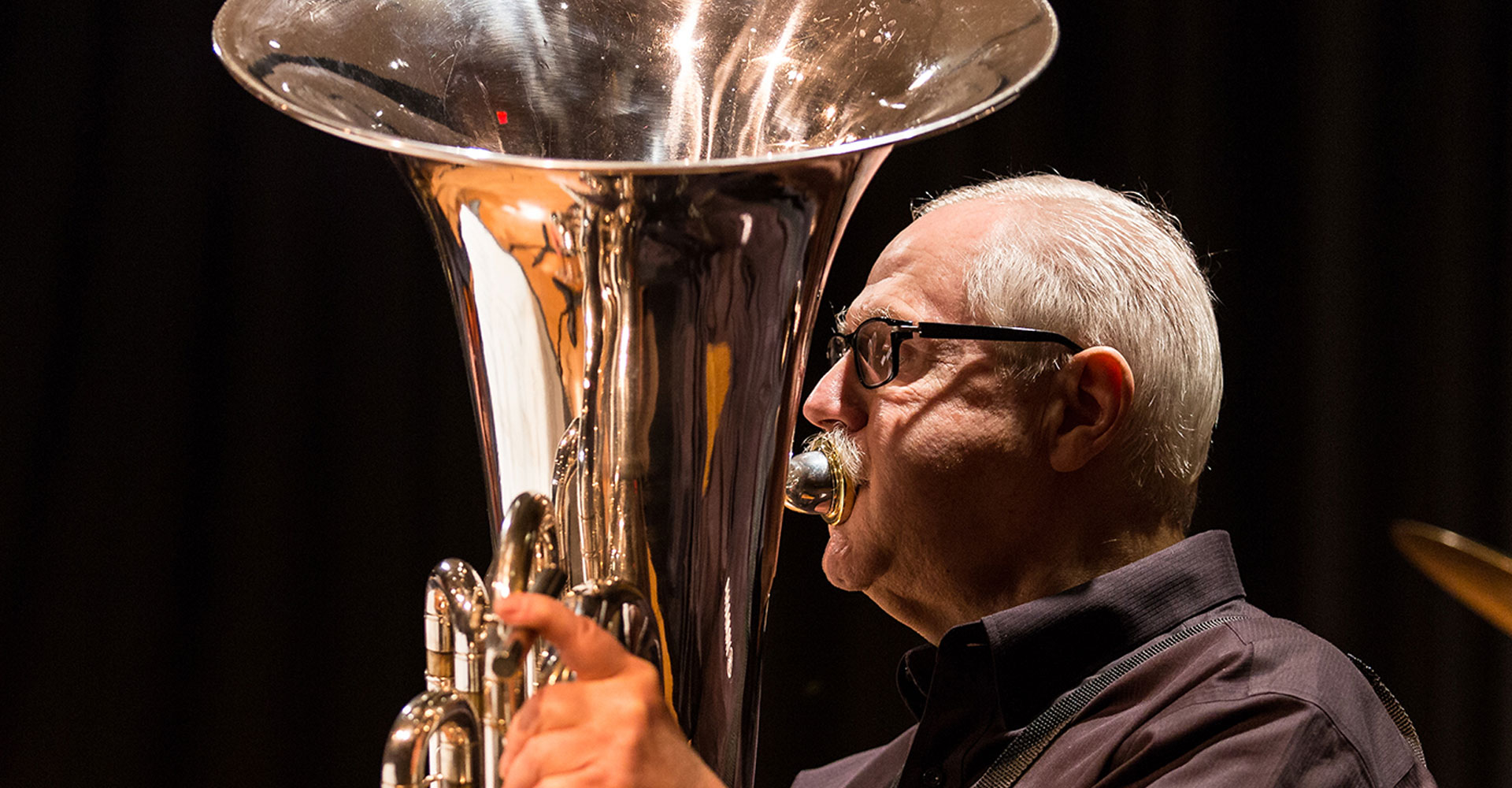 In more than four decades of studio work, Jim Self has played in over 1,500 movies, but during his Artist in Residence week in February, Knoxville audiences were treated to a slice of his work as an innovative and versatile composer.

If you had to say just one thing about Jim Self’s career, it would be the solo from the alien mothership in the movies Close Encounters of the Third Kind. Self had been living in Los Angeles for about two years, teaching at Southern Cal and becoming known as a studio musician when he got the call. “That’s the big bird in my cage,” he says. That solo actually includes two oboes, a contra bassoon, and Self’s tuba playing in unison, but our ears remember the deepest tones.

With his white hair, handlebar moustache, and easy manner, Self would fit right in to a western movie bar scene, maybe as the wise and understated bartender willing to talk to the new cowpoke in town. As Self recalls his 61 years playing the tuba, the 1,500 movies as a studio musician, the countless symphony performances, and the big lessons he emphasizes to his students, you get a sense of his modesty and respect for his instrument. 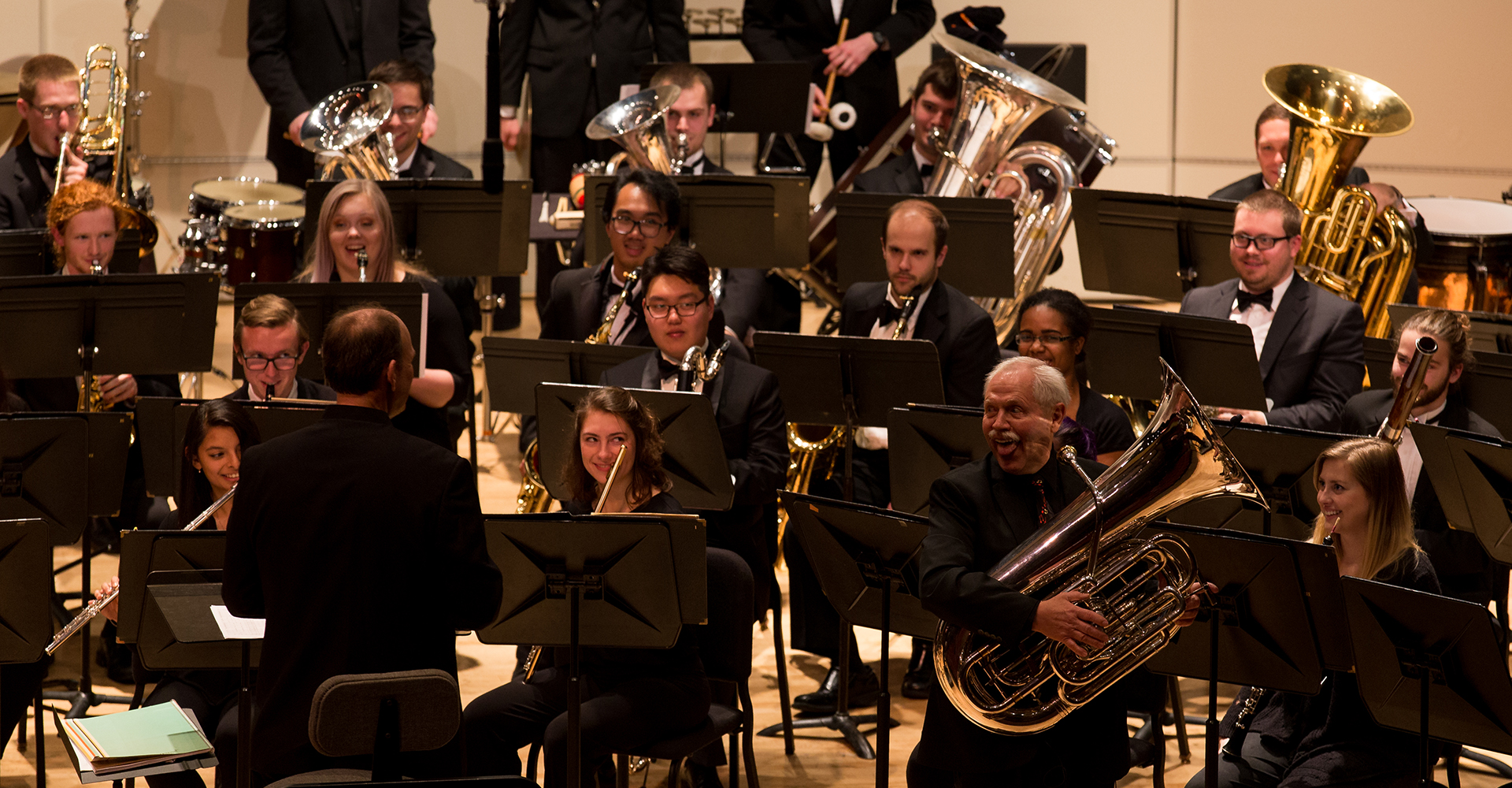 “I try to get my students to do the things that I should have done myself,” he says. “I tell them not to be afraid to improvise, play melodies, play by ear, and compose. I wish I’d started composing at 20 instead of 50.”

At 20, Self was studying music education under William Becker at what is now Indiana University of Pennsylvania, intending to become a high school band director. Born in 1943, he grew up in Oil City, Pennsylvania, so named because it was where oil was first discovered in 1859. Self picked up a tuba when the Southside Junior High School band needed a player, and he kept playing through Oil City High School. His mother became wheelchair bound after a stroke when Self was 6. His father, a factory production manager, died when Self was 15. “I lived with my grandparents for high school,” he says. “After that, I was on my own. I admired my high school band directors, so I decided to follow them.”

Indiana (Pa.) State College, as it was then named, was in the hometown of another humble western Pennsylvanian, Jimmy Stewart. After graduation, Self was student–teaching in LaTrobe, Pennsylvania, when he went to a US Army Band concert in Harrisburg. “On a lark, I went backstage afterward and asked if there was an opening for a tuba. By chance there was. I went to Washington, DC, auditioned, and I won.” In 1965, Self joined the tuba section that included Daniel Perantoni and Chester Schmitz, among others.

While in Washington, Self earned his Master of Music under Harvey Phillips at Catholic University. “The Army paid for it, so it was great,” he says. Self also played bass in a Jazz/Dixie Lounge act that had traveling dates. At one point they had a six-week gig at the Senators Club on Alcoa Highway in Knoxville.

“I was pretty gregarious,” says Self. “I had my tuba. I met some folks at UT—Les Varner, who was teaching tuba, and Don Hough, who taught trombone. We played duets.” Later, Varner was drafted. Al Schmied, the head of UT’s School of Music, called Self and hired him on the phone. For the next five years, Self taught at UT and played with the Faculty Brass Quintet and the Knoxville Symphony Orchestra. During the summers, he worked on his doctorate under tuba legend Tommy Johnson at USC. In 1975, Self took a leave of absence from teaching at UT to complete his DMA residency.

He got his first studio call a couple of weeks after he arrived in LA. “It was a TV show,” Self says. “I can’t remember the name. On that gig, the first French horn, Dave Duke, said to me, ‘Hey, kid, you sound good on that tuba. You’re going to do well in this town.’”

“In studio work, it takes a long time to get established,” Self remembers. “You’ve got to get to know people.” Self’s first big movie was Taxi Driver with two tubas, Johnson and himself, in 1975. “He was so good,” says Self of his mentor. “He was the only one who could do all the technical stuff. There was nobody around who could fill his shoes.” From there, Self played on a list of movies that includes Jurassic Park, Home Alone, Sleepless in Seattle, Wall-E, Troy, Valentine’s Day, Avatar, and Toy Story 3. (Johnson was on vacation during the week of the Close Encounters session.)

In Hollywood sessions, musicians often have to play pieces on sight. “You often don’t see a part before a session. You walk in and the music is there.” For the movie Hook, Self recorded with composer John Williams one morning. “We went out to lunch, came back, and there was a new cue on the stand. It was a high chromatic tuba solo eight bars long. It comes right before the food fight.”

To his students, Self stresses accuracy, versatility, and good rhythm, and he counsels students that sometimes even tubas have to improvise. For Lemony Snicket, composer Tom Newman assembled an electric violin, an accordion, guitar, a percussionist, and Self. “We did seven hours of improvising,” says Self. “It ended up in the movie.”

Overall, he says, “I’m not a traditional teacher. I tell them to learn melodies. Trumpet players get to play melodies more than tuba players, but I encourage my students to hear something and copy it. I always wanted to be a jazz player.” He also encourages students to start composing. Though he started late, Self has about 60 works as a composer and arranger that have been written for soloists and ensembles of many sorts. A dozen of his works were performed by UT students and faculty during Self’s weeklong artist-in-residence visit to Knoxville in February 2018. One such work, “Sousa, Phone Home!” (2002), played by UT’s Tuba/Euphonium Ensemble, featured a playful treatment of some immortal notes. “Tongue in Cheek” (2014) and “Dozeanddeeze” (2006), featuring Eileen Downey on piano and, respectively, Ronald Davis and Zach Collins on tuba, also provided a taste of Self’s playful side as a composer. 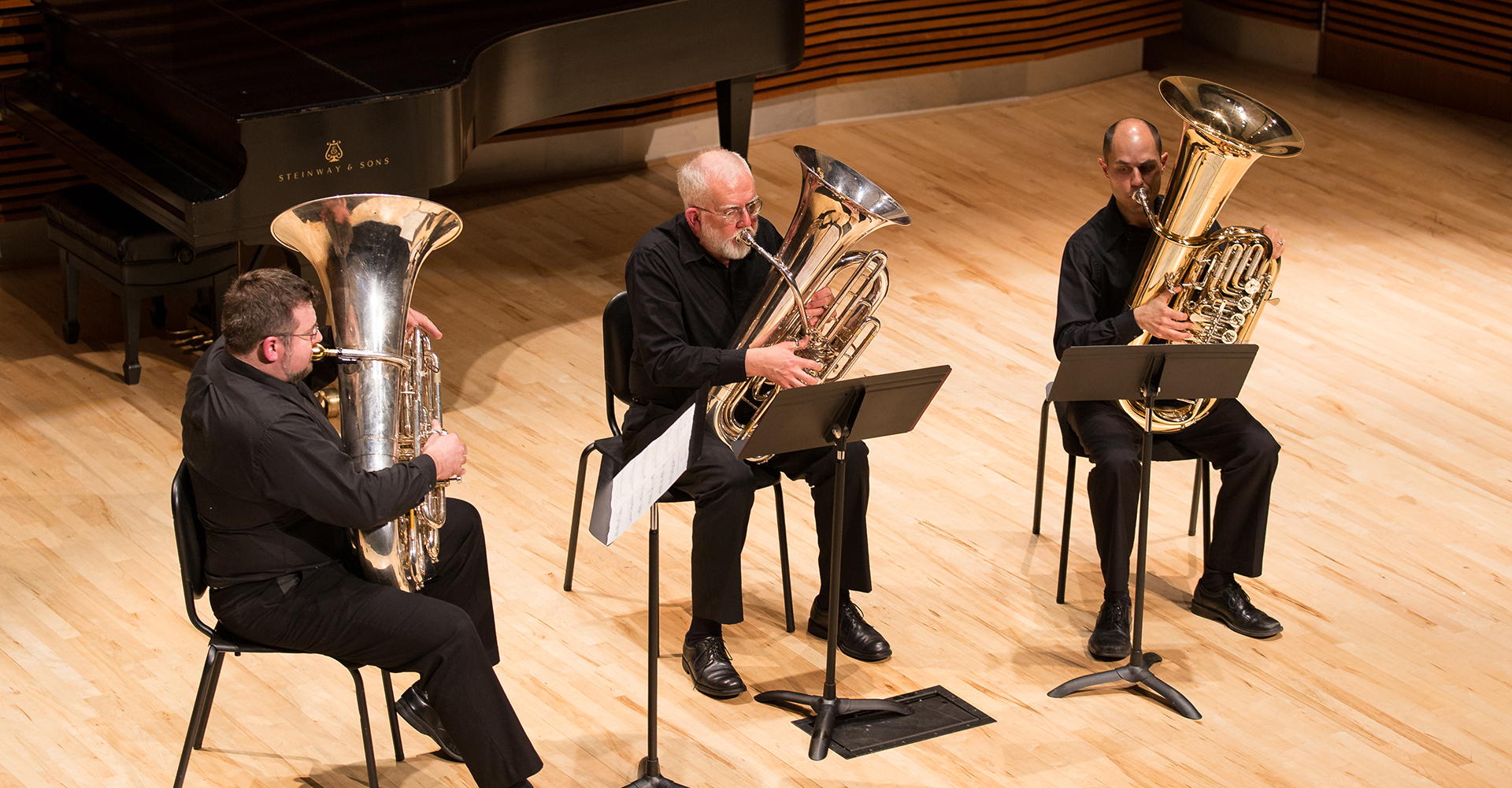 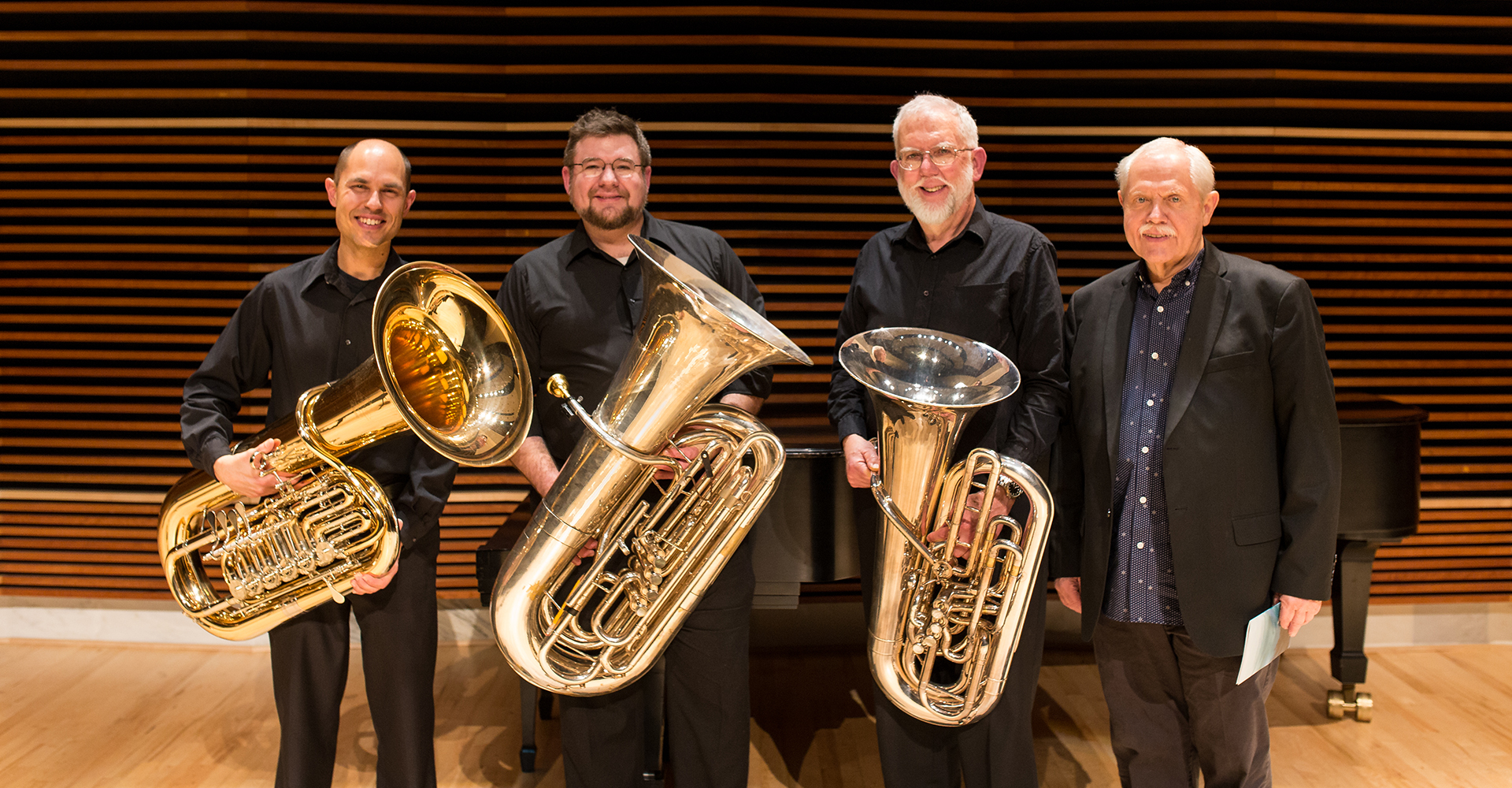 As a longtime member of the Hollywood Bowl Orchestra, Los Angeles Opera Orchestra, Pacific Symphony, and Pasadena Symphony, Self is particularly proud of the Pacific Symphony’s first European tour, in 2006, of Germany, Switzerland, and Austria, under conductor Carl St. Clair. They performed the autobiographical Strauss tone poem Ein Heldenleben (A Hero’s Life). “We got a standing ovation in Germany,” he says, “where they are very serious about their Strauss.” They also performed the concert version of Porgy and Bess. “Europeans are not used to hearing that kind of quintessentially American work,” says Self. “The people went nuts.” That tour was the inspiration for Self’s piece Tour de Force: Episodes for Orchestra. The wind band version was performed by the UT Wind Ensemble during Self’s visit. “I dedicated that piece to Sandy and John Daniels, who had donated $750,000 so the Pacific Symphony could make that tour.”

Self and Jamie, his wife of 31 years, have done their own philanthropy in recent years. They have endowed tuba and brass quintet scholarships at UT and his alma mater, Indiana University of Pennsylvania, as well as another tuba scholarship at the University of South Carolina.