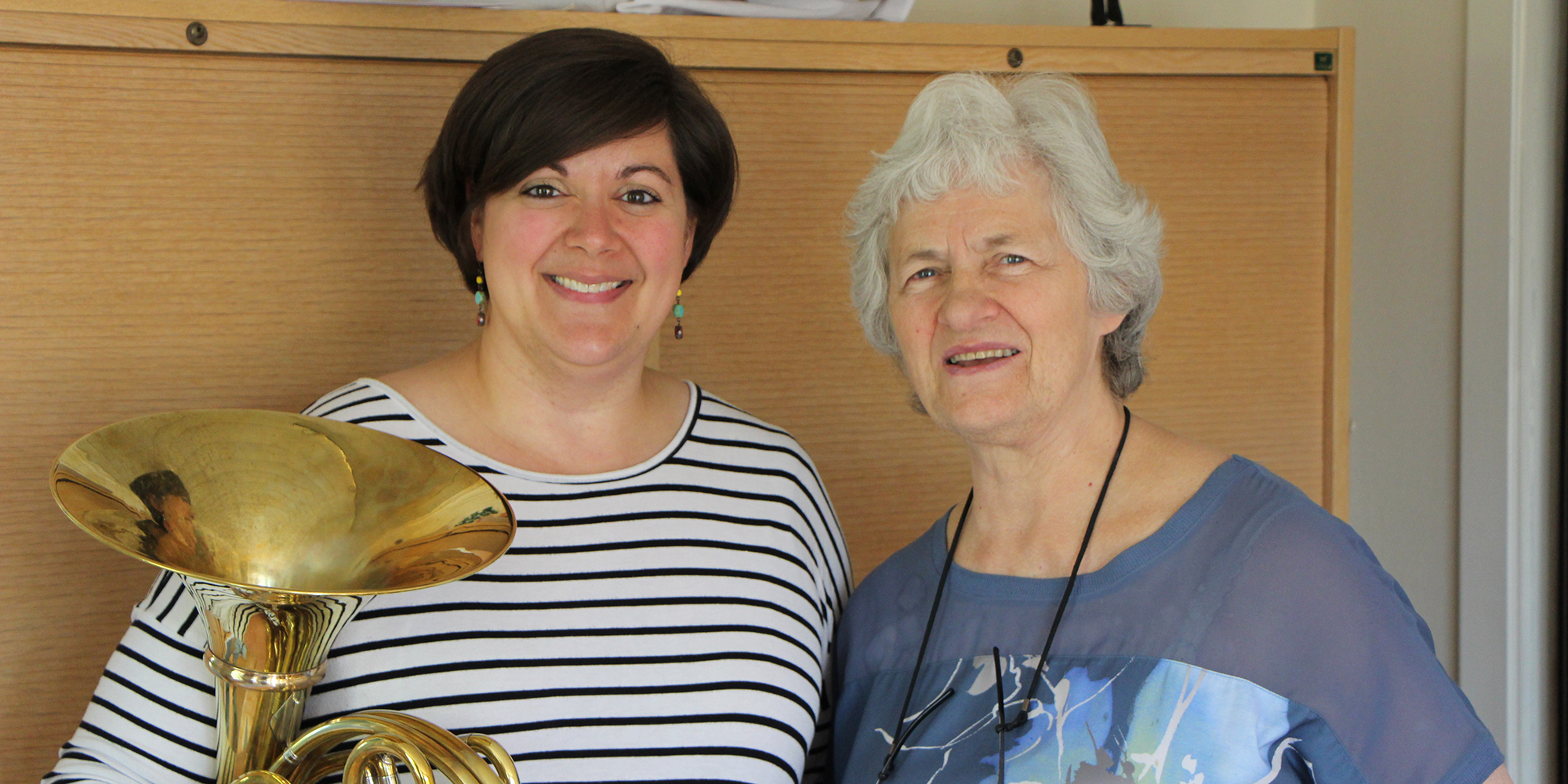 Practicing What She Preaches

It only took thirty seconds for Katie Johnson’s life work—teaching and playing horn—to be transformed.

The assistant professor of horn was playing for her idol, Frøydis Ree Wekre, one of the world’s leading horn players and teachers in Frøydis’s home country of Norway. Soon after beginning her repertoire, the musical icon stopped Johnson and said, “I can close my eyes and know that an American is playing.”

Johnson knew right away what Frøydis meant. She’s admittedly a type A personality with perfectionist tendencies and that tenseness came through in her music. Immediately, the teacher gave Johnson five areas to work on, starting with breathing techniques, that altered the way she plays—and teaches—forever.

On a musical mission

It was the kind of life-changing experience Johnson was hoping for.

The UT professor studied Frøydis, a household name in the horn world, in school, including reading her pedagogical book, Thoughts on Playing the Horn Well. But it wasn’t until witnessing her master class at the Northeast Horn Workshop in 2015 that Johnson became determined to work with her.

“She’s just a particularly powerful horn player,” shared Johnson. “She has a strong command of register. She can play anything and so for that reason composers from around the world really wanted to work with her and wrote very advanced music for her.”

The difficulty of many of the pieces composed for Frøydis makes them somewhat obscure here in the U.S., says Johnson. The style and structure of the compositions are unfamiliar and the harmonic progressions have a tendency to sound darker and richer. In short, comfort zones are pushed.

“In general, Americans tend to stick with a canon that is more dramatic and Romantic. We get comfortable with a standard repertoire and don’t always look for new things,” said Johnson, who was hungry for a creative challenge.

So, for two years, Johnson worked with colleague Kirstin Ihde, a piano professor at the University of Wisconsin-Oshkosh, to develop a plan for working with Frøydis and obtain grant funding to do it.

Their hard work and dedication paid off.

Johnson secured two trips to Norway to study with the legend with the ultimate goal of recording an album featuring repertoires never before recorded by an American. The financial support came from professional and scholarly development awards from UT and UW, and a grant from the American Scandinavian Foundation.

Johnson’s first trip to Oslo, Norway was in January. And as she put it, it was “all horn, all day.” She was partnered up with another American performer working with Frøydis. So, she’d watch their lessons, then have her own lesson, then spend evenings going to horn concerts and recitals.

“It was really exhilarating and exhausting at the same time,” shared Johnson. “We had the equivalent of an entire semester of lessons in just one month.”

Johnson returned to Oslo in June with Ihde where the two did lots of practicing, performing, and recording with Frøydis. Johnson and Ihde even had the chance to work with some of the composers of the pieces that will be featured on the CD—two Norwegians, Trygve Madsen and Wolfgang Plagge. The pieces on the forthcoming album include Sonata for horn and piano, Op. 24 by Madsen, A Litany for the 21st Century, Op. 39by Plagge, Sonata, Op. 88 also by Plagge, and Songs of the Wolfby American composer Andrea Clearfield.

In January, she also spent a lot of time on coaching of technique. Johnson was thrilled with the progress she saw in herself.

“She (Frøydis) was demanding and direct but in a kind and warm way,” said Johnson. “If something was wrong, she’d have you stop and fix it. I am sure her efficiency is one of the reasons why she is such a great teacher. She has such a great balance,” said Johnson, adding she was initially surprised by how friendly and easygoing Frøydis was.

The month was grueling and exhausting for Johnson but in the end she transformed not just her performance skills but also her teaching.

Johnson says her Norwegian experience opened her eyes to a new perspective of instruction. In America, things are done a certain way but, in Europe, the concepts and techniques are different. For example, in America, many horn players are taught to breathe low in their bellies and keep their bodies still. But in Europe, players are taught to be loose—shoulders can move and bodies can be fluid.

“It is a relaxed physical state of being and the hope is that your music follows that,” explained Johnson.

American musicians often study with American teachers who have a tendency to use similar pedagogical phrases. But, in Europe, they have their own key phrases. And, one in particular from Frøydis, stuck with Johnson—“You have to raise your standards.”

To Johnson, this wording epitomized Frøydis’s teaching style—direct and warm.

“She has this amazing ability to identify a problem immediately and comfortably state that something needs to be done about it.”

When Johnson returned to Tennessee, she adopted this style.

“We have a habit of teaching around a problem so that students feel happy and safe,” she said. “But that doesn’t give students the chance to fix the problem in the most efficient way. So, I am working to make more efficient statements in my teaching and that helps us get to tackling technical challenges faster.”

“It’s wonderful to see faculty members like Katie wanting to stay fresh,” said Pappas. “It enhances their abilities and their teaching. I know her students have benefited.”

Indeed, Johnson says her students have “perked up” and she’s noticed a remarkable difference in their motivation and progress.

One of those students in Hannah Smith.

Smith graduated this spring and is now pursuing her master’s in music performance from the University of Maryland. She hopes to emulate both Johnson and Frøydis by one day being a professional horn performer and teacher.

Smith says after returning from Norway, her professor had an exciting approach to teaching. For example, Johnson had the students work with one another to figure out issues or share different styles of music.

“Dr. Johnson has always been one to ‘think outside the box’ when it comes to her instruction, but I found she had new techniques and applications that were immediately clicking with me and improving my playing,” shared Smith. “With her gained knowledge and instruction, I was able to open up to new ideas and use perspectives I had never used before. It was incredibly beneficial to my learning and my playing.”

“Students get burnt out on music, but they’ve been able to look at a lot of new repertoire such as Russian and Scandinavian music that’s not readily available in the U.S. and they love it,” said Johnson.

When Johnson first started investigating Frøydis she was shocked by the size of the canon of repertoire written for Frøydis—and how she had not heard of many of the composers. Johnson realized she was missing out on hearing, learning, and playing unique sounds.

She doesn’t want others to miss out, as well.

That’s one reason why she’s laboring over the CD—spending much of her summer working with UT trombone professor Alex Van Duuren and a Nashville sound engineer to record it. It will likely take more than a year to produce the album and find a label. The hope is that it will eventually be available for download on sites like iTunes.

“There’s never any harm in learning more about the world’s cultures and composers,” she said. “I want to help people discover this type of music.”

Johnson also has plans to perform. She played a recital featuring Scandinavian music at UT in March. She also played at the International Horn Symposium at Ball State in August. On October 21, she and Ihde will give a recital at UT with plans to take it on tour to other colleges and conferences.

“I’m hoping our performances will spark interest in other musicians and teachers to pull music from different regions. I hope it moves us to push boundaries and stretch ourselves,” she said.

She also hopes all her efforts to chase her dreams inspires students and shows them that if they work hard enough, they can do anything.

“I am a performer who teaches and a teacher who performs,” she explained. “I can’t be available to my students 100 percent if the art I am teaching them to make isn’t also something I am actively making. Practicing what you preach is an important part of teaching.”

After all, if Johnson’s not inspired, how can she expect to inspire her students and transform them the way Frøydis did for her? 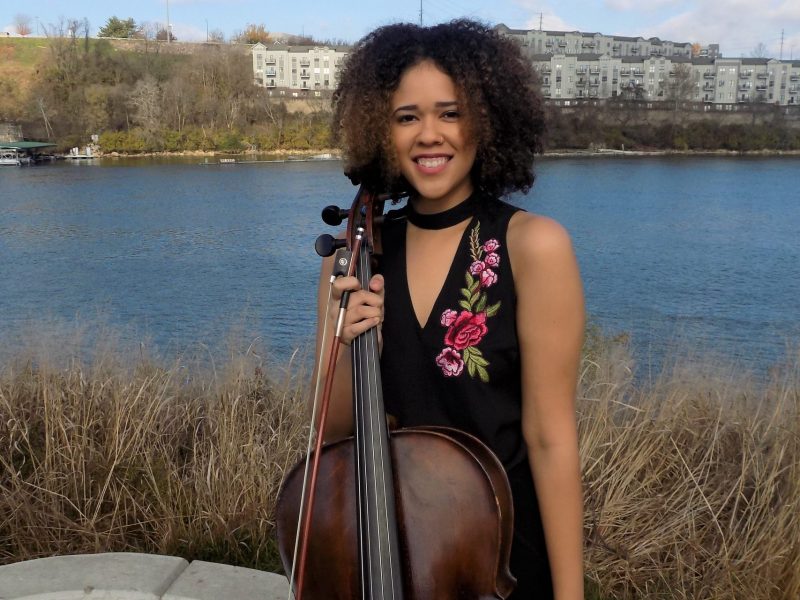